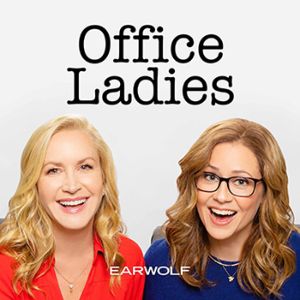 The Office co-stars and best friends, Jenna Fischer and Angela Kinsey, are doing the ultimate The Office re-watch podcast. Each week Jenna and Angela will break down an episode of The Office and give exclusive behind the scene stories that only two people who were there, can tell you.

The Office Ladies is a rewatch podcast of The Office, one of the most famous comedy TV series. The series is hosted by Jenna Fischer (Pam) and Angela Kinsey (Angela), both actresses featured in the TV show.

Each podcast episode dives into a specific episode from the TV series, Fischer and Kinsey provide context and background information about the show that no one has heard before. As someone who has watched The Office TV show (I only really recommend this podcast if you have watched it), it’s really interesting to go back in time and know what was going on behind the scenes during production. Every episode I learn something new about the characters, staff, what everyone was thinking, and the journey around this TV show becoming so popular among so many.

Fischer and Kinsey definitely bring an incredibly upbeat and ecstatic feel to the overall podcast series, as a listener it sometimes feels a little forced or fake and I would love to get to know their day-to-day personalities a little more. With that being said, they’re performers so I think that they just see this podcast series as another performing outlet.

Each episode is between 1-2 hours, I find them to be a little long, especially when Fischer and Kinsey go on tangents around random topics that are either related or not related to The Office. Personally, I think they could cut down the length of the episodes and still be able to provide the in-depth information that they want to. Overall, if you have watched The Office and either want to know about specific episodes or the entire TV series, I definitely recommend hearing it from two people who lived it.