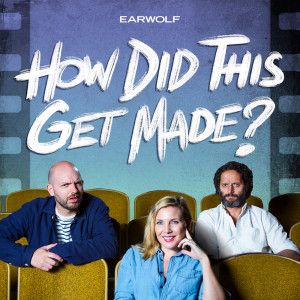 How Did This Get Made?

How Did This Get Made?

How Did This Get Made? is an American podcast that takes a look into the movies that you vaguely remember watching, and then immediately ask yourself, Why did I just watch that? Comedian/Actor Paul Scheer moderates with 2 co-hosts, his wife the Actress/Author June “Juuuuuuuuuuune” Diane Raphael and their friend Comedian/Actor Jason “Zoooooooooooooooks” Manzoukis. Every episode comes with a guest that can include everyone from A-listers Charlize Theron, Seth Rogan or Daniel Radcliffe to a group of their friends that are considered HDTGM all-stars like Nick Kroll, Casey Wilson and Adam Scott (who’s recurring appearances always coincide with the release of the latest Fast and Furious movie). Every episode takes a detailed look at the movie in question and always asks the question, How did this get made?

How Did This Get Made?: Podcast Review

This is the podcast that showed me that podcasts, much like Netflix, are a bingeable medium.

When first introduced to me in 2011 there was already a small backlog of episodes from when it started in 2010, that I quickly burned through. The comedy that comes from the discussions between the co-hosts who are all 3 well versed in the art of improve is second to none.

Movies range from big budget failures like Van Helsing, cult classic films like Sleepaway Camp (it’s required listening for anyone who has ever seen this movie), made for TV movies like When Harry & Meghan: A Royal Wedding Story and movies you had no idea were even made like The Garbage Pail Kids. Originally every episode was recorded in a studio but as the podcast has grown in popularity their live shows are recorded and released every 2 weeks. The live shows come with their own traditions that the audience, where ever they are, buy into.

From the opening song to their ever revolving “Second Opinions” jingles that someone in the audience will perform the podcast itself has turned into a “cult classic” that the 3 hosts would appreciate.

They release the name of the movie they will be watching the week before the episode is released on the Paul only mini-sode so you can watch along with them.

Warning: once you start listening you might find yourself in a wormhole and asking if you are indeed in a Jacob’s Ladder scenario.