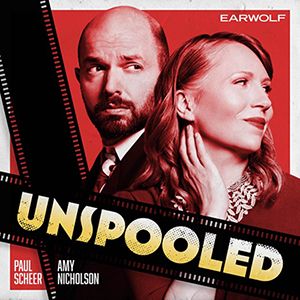 In 2018 Comedian/Actor Paul Scheer and former chief film critic for the LA Times Amy Nicholson decided to take a deep look into the American Film Institute’s Top 100 films and try and figure out if that film belongs on the list or should be replaced. Starting with #1 on the list Citizen Kane and followed by #100 Ben-Hur. Paul and Amy pick a movie a new movie every week. Each week they bring in a guest who is an expert on the movie in question. Paul and Amy give each film a detailed and respectful look and leave no reel Unspooled.

Host Paul Scheer must have had enough of watching terrible movies because this podcast is the exact opposite of his other podcasting venture How Did This Get Made? Luckily for him in Amy Nicholson he has brought in a critical heavy weight to be his co-host. Amy gives the much needed history and context for each film and Paul brings either his fandom/dislike for the movie if he has seen it or his curiosity about the movie if he hasn’t. Even though Paul is more known for his comedy and Amy for her seriousness they both meet in the middle with a fun and earnest discussion into whatever movie they are featuring. This podcast is not afraid to call a spade a spade when it comes to some films being on the list that they feel probably don’t belong there. There’s nothing worse than a list that plays it safe and Amy and Paul are not afraid to make the point: Do you really need so many movies about Vietnam? Is the Shawshank Redemption as good as it claims to be?

Along the way they still heap praise upon the movies that deserve it and the directors/writers/actors/actresses who have paved the way for modern cinema. Every episode comes with a special guest who is an expert in certain fields that the movie depicts. For example, Director Jeff Tremaine comes in and discusses Buster Keaton’s revolutionary work with a train on The General and an animation historian explains the revolutionary animation process that Walt Disney used to make Snow White. At the end of each episode they decide whether or not the film belongs and if it doesn’t what comparable movie could replace it.