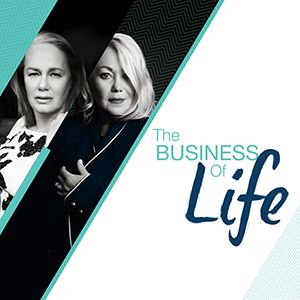 The Business of Life

The Business of Life

The Business of Life is a lifestyle podcast co-hosted by Arlene Dickinson one of the dragons on CBC’s Dragons’ Den, and Jann Arden, a famous Canadian musician.

The Business of Life: Podcast Review

There is no doubt that powerful businesswomen such as Jann and Arlene have experienced immense demand associated with success and fame. Their combined experiences could certainly make for compelling discussion on a variety of topics associated with the intersection of business and life (per the title of the podcast). Unfortunately, the pair fail to reach any substantial, actionable conclusions within their discussions as a result of the tangential nature of each episode. Although the topics, including family, love, sex, business and friendships are certainly of interest, most banter is quite scattered and difficult to follow.

Arlene Dickinson is one of Canada’s most renowned independent marketing communications entrepreneurs.

As CEO of Venture Communications, her creative and strategic approach has turned the company into a powerhouse with a blue chip client list. She is also the General Partner for District Ventures Capital, a fund she built in 2017 that is dedicated to investing in entrepreneurs in the food and health CPG spaces. Dickinson also founded District Ventures, a leading-edge national accelerator located in Calgary that connects innovative early-stage companies with top entrepreneurs, investors, and commercialization support.

Dickinson is best known as one of the venture capitalists on the award-winning CBC series Dragons’ Den and The Big Decision, as well as a marketing expert on Recipe to Riches. She is the author of two books, the number one bestselling book, Persuasion and her most recent best-selling release, All In.

Jann Arden is a Canadian born, singer, songwriter, broadcaster and author.  The much-celebrated multi-platinum award-winning artist catapulted onto the Canadian music scene in 1993 with the release of her debut album “Time For Mercy” featuring the hit single, “I Would Die For You”.  A year later with “Living Under June”, she would have her career breakout hit, “Insensitive” that would solidify her position in the music world.

Emma Harris is the former Founder of Healthy Pets, the first Canadian application designed to connect pet owners with reliable digital veterinary care. She now serves as Head of Business Development for Pawzy, a marketplace designed to connect pet parents with the best pet healthcare advice and services. She resides in Burlington, Ontario with her husband, two dogs and cat. Emma can be reached at emma@pawzy.co.