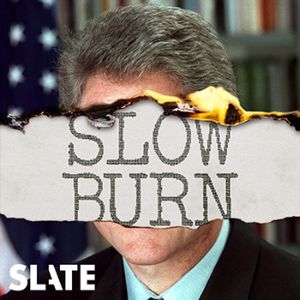 If you’re like me - a Canadian who was a pre-teen in the ‘90s - you probably know OF the Watergate and Monica Lewinsky scandals. You’ve watched All the President’s Men; you know the term “Deep Throat,” the names Woodward and Bernstein, and have seen a clip of Nixon insisting “I am not a crook!” And you of course know about the infamous blue dress, the White House affair, and the lifelong impact it had on the reputation of an intern. But I never TRULY knew the details of these stories - until Slow Burn.

The first season of this show tackles Watergate; the second tackles the Lewinsky scandal. Each story unfolds over 8 episodes, and each of those episodes tackles a different aspect or perspective of the issue.

This isn’t an overview - the Lewinsky season starts with a deep dive into Clinton’s political start in Arkansas, then weaves through his political rivals as governor, then tells the backstory of Paula Jones, the years-long efforts of Kenneth Starr, and then finally gets to the blue dress. If you want a Wikipedia-style overview, this isn’t it. But if you’re like me, and you’ve always wanted to know more about two of the century’s biggest political scandals, then the Slow Burn podcast is well worth the listen.