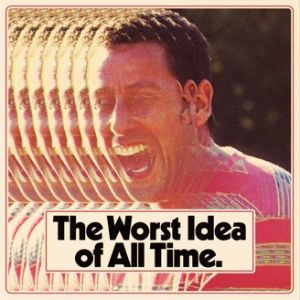 Worst Idea of All Time

Worst Idea of All Time

Worst Idea of All Time is a comedic podcast where two best friends watch the same (terrible) movie every week for a full year.

The Worst Idea of All Time was one of those things that was just ridiculous enough to work. Over the course of its four year run (the podcast wrapped after four seasons in 2018 though there are rumours of a return), best friends Tim and Guy watched the same movie every single week for a year. In the first season they elected to watch Grown Ups 2 every week (neither of them had ever seen Grown Ups), and in the second season Sex and the City 2 when neither had ever seen the original Sex and the City movie.

While this seems like the sort of thing that could get old quickly, for whatever reason, it works. It’s strangely appealing to watch Tim and Guy (both comedians by trade) slowly lose their minds, watching these arguably mediocre at best movies on a loop week after week and doing whatever they can to cope. Something about others suffering for our enjoyment can be quite satisfying as a listener, as dark as that may be. As the weeks go by, Tim and Guy often take more and more drastic methods to cope. They show up to viewings drunk, on drugs and in various other states just to get themselves through it.

Aside from this obvious tortured comedy, it’s also interesting to watch media be consumed in a way it was never intended to be and see what results from this. The relationships Tim and Guy develop with the characters in each of these movies are something to behold. They know every line they have, every move they make, every expression, every smile and they analyze and over analyze these things over and over, screaming at Adam Sandlar when they know he’s about to do something they don’t agree with, pleading with Sarah Jessica Parker to make a different decision than she did the past 30 weeks. It’s also interesting to watch Tim and Guy change their minds about things, and makes listeners think twice about their quick reactions not just to movies and characters but to everyday life. Tim may have thought Charlotte’s behaviour in Mexico was pretty immature the first ten times he saw the movie, but by the end of the year, he TOTALLY got where Charlotte was coming from. A fun little lesson not to judge things too quickly and to give second chances.

As podcasts go, The Worst Idea of All Time certainly doesn’t take itself too seriously. Even the title is wildly self-deprecating, but year after year the format strangely held up. It’s been said that the definition of insanity is doing something over and over again and expecting different results. I don’t think Tim or Guy would argue that they may be a bit insane, but as I said, for whatever reason, it works.