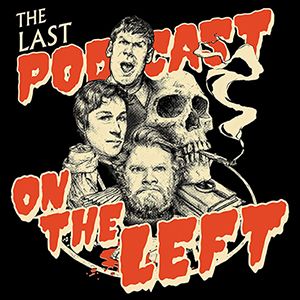 The Last Podcast on the Left

The Last Podcast on the Left

The Last Podcast on the Left is a comedic true-crime podcast about a range of topics from serial killers, to aliens, to the totally unknown.

The Last Podcast on the Left: Podcast Review

The Last Podcast on the Last is hosted by Ben Kissle, a former (democratic leaning) political journalist at Fox News and avid podcaster and Ben Zebrowski, an actor and comedian. It's produced and researched by Marcus Parks, a scientist and historian.

In general, Marcus provides listeners with the well researched stories and anecdotes for conversation while Ben and Ben think critically about them and takes the conversation further. While conspiracy theories and wild takes are nowhere near off-limits, Ben K and Marcus try to take a very scientific, unbiased approach to telling and analyzing these stories. Ben Z on the other hand, serves as a kind of comic relief. His takes are less rooted in rational thought and science and better reflect how any regular guy might react or analyze the crazy stories Marcus shares. Topics can range from things like infamous serial killers (Charles Manson, Ted Bundy, Jeffrey Dommer), extraterrestrial beings, or government conspiracies. While most people have heard these stories before, this podcast has a way of not only digging up the lesser known details and interesting facts to shine a new light on these infamous stories, but also of telling the stories in a comedic fashion.

Subjects that you would never think could elicit a laugh are flipped on their head and looked at through a different lens; all the while ensuring they maintain a level of respect for any victims involved in the story. Joseph Kallinger for example was a deranged, schizophrenic lunatic known as "the shoemaker" who eventually killed three people but it's rarely focused on that he was actually trying to "save the world using orthopedics". TLPOTL deconstructs this through a comedic lens, giving listeners a different take on the story.

Takes are always insightful and since they reflect the thinking of three very different guys, they make listeners look at things in ways they may not have before--the mark of a great podcast.