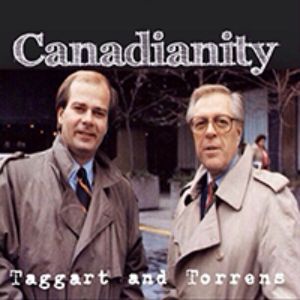 Jeremy Taggart of the legendary Canadian rock band Our Lady Peace and Jonathan Torrance of everything funny that has come out of Canada since he was a teenager are 2 “Bahds” (Canadian for buddies) who record their once a week hour long phone conversation. Where each conversation goes can take the listener on a ride that can bring you to tears of laughter or tears of nostalgia. This podcast is steeped in “Canadianity” as both hosts are fluent in everything pop culture from north of the border, and celebrate it with the kind of verve that any Canadian will truly appreciate.

No other podcast has made me laugh harder for longer than the Bahds, T&T. They speak in a language that every Canadian can appreciate. The 2 are able to flex their comedy muscles in major ways. But they are moving on different wavelengths. Taggart is not a trained improv artist, but he is a world class drummer who has a natural understanding of timing and tempo that go into jokes and story-telling. He also knows when to let Torrens go and is fine with taking a back seat to his co-hosts characters.

Each episode comes with stories from growing up, their families and being a “bahd”. Every episode also includes original Canadian-centric games like “Canadian Tire Flyer Lower or Higher?” and “On the Darts?”. They also have a stable of characters that the 2 have grown into their own world. Who would have ever guessed that the dynamic of singer Gino Vannelli and his brother Joe would be so funny? Or the idea of a French Male Strip Club DJ on SCTV night in Sherbrook Quebec is a scenario so outlandish that you have to tip your cap to it.

Torrens is in my opinion one of the most underappreciated comedic voices Canada has ever produced. Jonathon brings a style of comedy that is closer to the classic stylings of Groucho Marx and Rodney Dangerfield vaudevillian comedy that comes so fast and seemingly off the cuff that the more you listen the more you appreciate a genius at work.