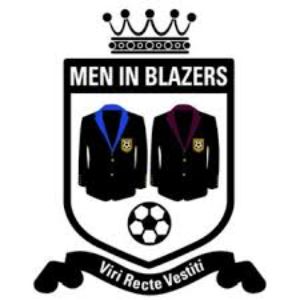 Men in Blazers is U.S.-based soccer podcast (now in association with NBC Sports) hosted by two British expats who try heroically to bridge the gulf between the sporting and popular cultures on both sides of the Atlantic. Content is typically very heavy on the English Premier League and U.S. Men’s and Women’s National Teams, as well as choice references to Downton Abbey or Game of Thrones.

I don’t recall the precise circumstances I first chanced upon Rog and Dave-o (or as their passports would know them, Roger Bennett and Michael Davies) but my relationship with their podcasting endeavours has been nearly as long-lasting as any other in my life.

The subject matter (mainly British soccer, though they wave the Stars and Stripes for the U.S. Men’s and Women’s teams a lot and make a genuine effort to promote the game domestically in their adopted country) certainly had an allure for me but I think the reason I kept coming back, and back, and back would be what the New York Times characterized as their “absurd levels of chemistry.”  At its heart this is a show about two accomplished and articulate middle-aged men who stumbled upon the perfect way to spend a couple of hours together a week and then had it pay off.  Big time.

Though the format has changed a little from years gone by (the interview segments, formerly a favourite of mine, have largely been transferred to the Men in Blazers TV show broadcast on NBC Sports in the U.S.) the core concept remains the same: banter between exuberantly pessimistic Rog from The North of England and bullishly optimistic London-born Dave-o.  Amazingly these two only met each other in 2006 at a mutual friend’s wedding, but from the ease of their repartee and relationship you’d think they were old school chums.

If you have an interest in “footy”, or would like a low-barrier to entry way to help get further interested/informed, this is the pod for you.  Who knows?  Maybe someday soon you, too, will join such luminaries as ex-NFL Quarterback Andrew Luck, comedian John Oliver, or musician Shaggy as a “GFOP (Great Friend of the Pod)”.

Essential first listens: Leicester City’s miraculous season finale and the insights of Oakland Athletics GM Billy Beane on how they “Moneyballed” their way to the title.