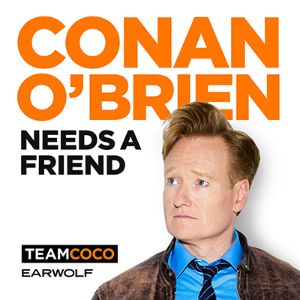 Deeper, unboundedly playful, and free from FCC regulations, Conan O’Brien Needs a Friend is a weekly opportunity for Conan to hang out with the people he enjoys most and perhaps find some real friendship along the way.

There is no question about it: Conan O’Brien is a skilled and engaging interviewer. We only see glimpses of it on his TV show, but in this format he really gets his chance to shine. Not only is he a great interviewer, he is a committed comedian-- in many of the episodes he runs “bits” with his guests for such a long time you start to get confused about whether he is in on the joke.

Not just a simple interview style podcast, Conan and his co-host Sona are really creating comedy. Unlike on his talk show where the guests are there to give canned stories and promote their next projects, in Conan O’Brien Needs a Friend, Conan really gets a chance to work with them to build something and have a valuable (and hilarious) dialogue. He keeps it accessible, balances comedy and serious talk, and avoids droning on too much or focusing on the dry things we already know about.

“Conan O’Brien Needs a Friend” honestly stretches beyond the audience that Conan already has on his late night show. It’s a really excellent way for people not familiar with Conan O'Brien and true comedy buffs to be introduced to a formative member of the comedy world