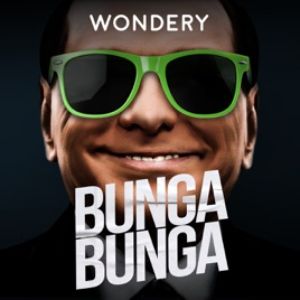 “Silvio Berlusconi was the charismatic multi-millionaire real-estate mogul who set out to up-end the Italian political order. With his wealth, charisma and connections he became one of the most powerful men in the world until two words helped bring him down: ‘Bunga Bunga.’ This is the incredible true story of the rise and fall of Silvio Berlusconi.”

Bunga Bunga is produced by the U.S.A.’s Wondery and is hosted by American comedian Whitney Cummings but it is all about the recent political history of Italy and the astonishing role played by controversial former Italian Prime Minister Silvio Berlusconi.

There are salacious details aplenty, including an eventual explanation of the podcast’s name, but the most interesting aspect of the story, in my own view, is how Berlusconi parlayed his control of much of the country’s popular media to rig the democratic game in his own favour, tapping into many Italians discontent with traditional, seemingly ineffective and corrupt political elites in order to present himself as a robust and businesslike alternative.

Yes, Berlusconi’s populism may have once been written off as a uniquely Italian political phenomenon but with the aid of hindsight and Cumming’s incredulously humorous delivery it’s easy for the listener to identify how a lot of the warning signs of this past decade’s political morass were clearly on display throughout the ‘90s and ‘00s.  Silvio shamelessly pursues his own interests, manipulates the political system and news media to become a master of political survival who somehow continues to have fans and supporters to this very day (he is currently a member of the European Parliament!) in spite of his numerous failings and public humiliations, culminating with his conviction for paying for sex with the underage “Ruby the Heart-stealer” in the year 2010…at the age of 76.

There are only 8 main episodes plus one follow-up bonus episode, so this is not an ongoing series but if you are interested in a wild ride to fill the hours of a long road trip or your workouts for the month this is a great option.  As a bonus you’ll learn some very choice Italian vocabulary along the way!

Episode 1. “I Know How to Make People Love Me”.  From Wondery: Silvio Berlusconi began his career as a nightclub and cruise ship singer. But he would eventually find an even better way to gain the adoration of the crowds: become an incomparably powerful real estate and media mogul. But just as he’s at the top of his game, Silvio’s business interests are threatened when a politician is caught flushing cash down a toilet.