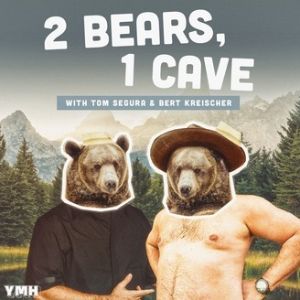 In 2 Bears 1 Cave, every week comedian best friends Tom Segura and Bert Kreischer get together in the bear cave at YMH Studios to do what bears do: make each other laugh.

This comedy series is definitely not for the more conservative listener. 2 Bears 1 Cave is hosted by famous comedians Tom Segura and Bert Kreishcer (highly recommend checking out their Netflix comedy specials). Similar to most podcasts hosted by famous comedians, each episode usually runs a little over an hour and is a raw conversation with either the two hosts or sometimes another friend is brought into the discussion.

To be honest, there isn’t any format to this series. Bert and Tom go on tangents and get distracted but that’s the beauty of this podcast, the two of them are hilarious on their own and when put together, all you really want is to listen in on their conversations because they will have you laughing to yourself. The actual content of the podcast tends to be more R-rated humour so it may not be the type of series for all but that’s okay, I don’t really think they want that anyways.

As a seasoned watcher and listener to many comedy specials and comedy podcasts, 2 Bears 1 Cave is a great series to tune into. Since Bert and Tom bring in fellow comedians, if you’re not familiar with the space, it may come off a little more confusing and you can get lost with who they’re talking about but with those on the inside, it really adds to the humour of the series.

Overall, 2 Bears 1 Cave is a hilariously inappropriate comedy series and can have the listener laughing out loud. I definitely recommend giving this series a listen if comedy podcasts are your type of content.