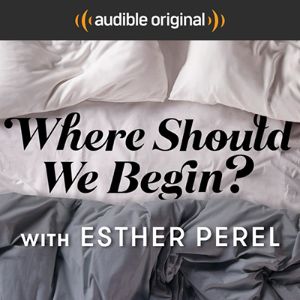 Where Should We Begin?

Where Should We Begin?

Where Should We Begin? with Esther Perel is a podcast that features real-life therapy sessions where couples anonymously bare intimate and raw details of their story under the guidance of therapist Esther Perel – who is quite simply brilliant.

Where Should We Begin?: Podcast Review

When “Where Should We Begin?” was launched there was nothing else like it out there. Each episode is conducted in Esther Perel’s psychoanalytic practice in New York and follows the same format: a condensed and edited one-time, three-hour therapy session. Perel who now has a cult-like following is an expert in infidelity or, as she calls it, losing emotional security.

The couples she sees are stuck: stuck in their relationships and their respective roles, their resentments, their hurt, their dissatisfaction and are used to seeing their situation from one point-of-view. Perel uses her expertise to help the couple uncover painful truths and encourages them to get honest about the breakdown of their relationship. Listening to these sessions is deeply provoking. None of the patients will have problems exactly like yours, but there will be moments of overlap and insight that are hard to shake.

The spectrum of topics covered are not only broad but beautifully unique; episode one in season one is about a Muslim-American man and his Russian Orthodox wife dealing with the fallout of his cheating, the second episode focuses on a lesbian couple suffering from an imbalance of affection and in the third episode we are introduced to a young couple who met in college and were members of a Christian purity movement and now find themselves in a sexless marriage.

Listening, you will find your perspective on yourself and your relationships changing, and it is a listening experience that encourages you to be deeply introspective and curious. (Word Count: 251)

Belgian psychotherapist Esther Perel is the New York Times bestselling author of The State of Affairs and Mating in Captivity. Her celebrated TED talks have garnered more than 20 million views and she is also the host of the popular podcast Where Should We Begin? Learn more at EstherPerel.com or by following @EstherPerelOfficial on Instagram.

A team of experienced podcasters that are looking to equip brands with the necessary resources, knowledge, and insights to create a successful branded podcast.