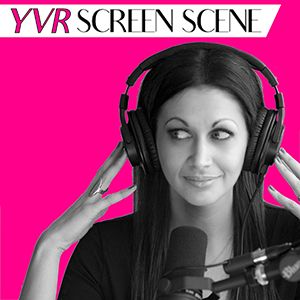 The YVR Screen Scene is a deep-dive interviews with creators, performers and storytellers about their work in the TV and Film Industry based in Vancouver, Canada.

The YVR Screen Scene's host, Sabrina Furminger’s mission is to (in her own words) “rip back the curtain on the Vancouver Film and Television Industry and expose its beating heart, Indiana Jones and The Temple of Doom-style!”

There can be very few individuals in the greater Vancouver (airport code YVR, hence the podcast’s name) or elsewhere for that matter better qualified and equipped to do so than Sabrina, whose exuberance and insight leads to one great deep-dive interview after another.

Since a lot of the subjects being interviewed are more active in the background (producers, showrunners, voice actors, writers, stunt performers) or your proverbial “working actors” it is a fascinating way to see how the entertainment industry in Hollywood North really works, warts and all, as well as inspiring and compelling career stories for those who have ever dreamed of contributing to the stuff dreams are made of.  She also doesn’t shy away from the “difficult topics”, such as mental health or the reality of racism in Canada’s entertainment community and elsewhere.

Let The YVR Screen Scene and her bevvy of talented guests into your podcast feed once a week or so and you’ll be the richer for it.