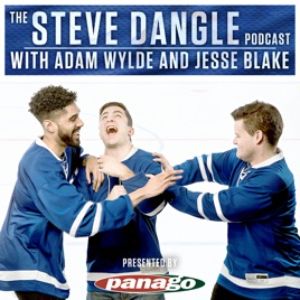 The Steve Dangle Podcast is all about Toronto Maple Leafs news delivered in a comedic format from a very short tempered guy.

Steve Dangle is an angry Leafs fan who wrote a book called "This Team is Ruining my Life", a relatable book about the struggles and pains of being a devoted Leafs fan.

It's a funny show to listen to because Steve's pain and frustration are known all too well by only Leafs fans-- as is his angry, unwavering devotion. He offers his perspective on all things TML and NHL as an expert (Steve is a journalist for Sportsnet) but also as an average fan (he only got discovered by Sportsnet due to the popularity of his podcast and YouTube channel).

Like with a lot of good comedy, the humour is in Steve's rage. He's angry at the NHL, he's angry at the Leafs, he's angry at specific players and officials, yet his devotion is unwavering and he can't stop coming back for more. And because of that, sometimes, he's angry at himself-- an all too relatable qualm for any Leafs fan. And we revel in joining him in this rage.

The Steve Dangle podcast does a great job at providing a relatively unbiased take while still remaining committed (alarmingly so) to his team.

Two small areas he could improve: some episodes could be shorter. I know how it feels to get deep and dirty into an angry rant, but sometimes listeners don't have a full two hours to listen to him hammer home a point that could be made in one so they end up skipping it altogether. The only other thing I might suggest for Steve's health is to seek anger management. But on second thought, the content would probably suffer so maybe just take that one for the team and keep at it Steve.