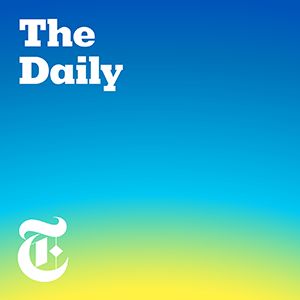 The Daily is a podcast about current events put out by the New York Times.

Hosted by Michael Barbaro, “The Daily” explores news stories as reported by the New York Times journalists, exploring themes of culture, politics and more. This podcast excels at taking big, sometimes overwhelming stories and topics and breaking them down into digestible narratives that can be easily understood. They take tough, complex and polarizing subjects and explore them in detail so that any listener can understand.

While typical daily news reports on a myriad of different subjects for brief amounts of time, “The Daily” serves instead to focus on telling one story and telling it well. In this political climate especially, it’s easy to feel like certain things are so over our heads that it makes more sense to be hands off, and just avoid discussing them altogether. This is exactly what the hosts and producers at “The Daily” want to encourage against. It’s important for anyone and everyone to have an understanding of what is going on in the world and they want to give listeners the tools to ensure they can do so.

As an example, “The Daily” recently published a podcast tackling the complex issue of the USA withdrawing troops from Syria and abandoning their Kurdish allies. This is a complex issue dating back several decades and involving many different wars, countries and politics. Barbaro breaks it down in detail, step by step and piece by piece, weaving in interviews from reporters they currently have on the ground, others who have been involved in the conflict in the past and more.  The podcast aims to tackle big issues in a way that anyone can understand so that we’re all on the same page.

As the New York Times obviously holds any media they put out, to a certain journalistic standard, you can always count on quippy remarks, well-researched discussion and quite plainly--good writing. Topics that can seem to stiff, too complex or just too much when reported on in The Times, seem much more approachable when broken down in this format and allow listeners of any expertise level to be more well-informed, understanding and active participants in the world around them.