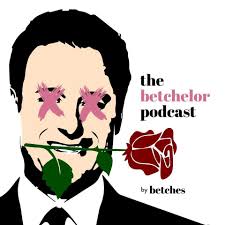 In The Betchelor podcast, Betches media producer Kay Brown is joined by Bachelor alum Derek Peth for unfiltered recaps of the latest Bachelor, Bachelorette and Bachelor in Paradise episodes. There might be a little wine involved, and a lot of spilled tea.

As someone who has watched every episode of the Bachelor since it aired in 2002 - that’s 23 seasons of The Bachelor, 15 of The Bachelorette and six of Bachelor in Paradise - I am an esteemed expert. That is, I do have a day job but have devoted many hours to this franchise.

I listen to three Bachelor podcasts, and this is my second favourite. My top choice is The Ben and Ashley I Almost Famous Podcast for the high volume of Bachelor alum guests, but I do prefer the tone of The Betchelor podcast. Ben and Ashley could spill more tea, and The Betchelor could bring in more “celebrity” guests. I also appreciate that The Betchelor keeps ads to a minimum, while Ben and Ashley shill mattresses and Fab Fit Fun boxes at every opportunity. But who can blame them? That’s their full-time job now as professional influencers.

Kay captures the famous “Betches” tone and Derek is decidedly normal, not a professional influencer and very woke. I guess the woke part makes him abnormal, sadly. On his recent stint on Bachelor in Paradise (his second Paradise appearance and third for the franchise), he handled himself like a gentleman when broken up with by a bisexual woman, Demi, for another woman - a first for the Bachelor! He cried over his loss of companion to another person but was understanding and supportive of Demi’s decision to come out on national television. Later in another love triangle with surfer dude John Paul Jones over Tayshia Adams, Derek kept his cool when JPJ inexplicably blew up at and gaslighted him. Lies, JPJ! All lies! Derek has yet to find love through the franchise, probably because crazies attract crazies.

I like that Kay and Derek will go in on the Bachelor contestants even if it means they may lose a future guest, but they could invite more guests worthy of their time.