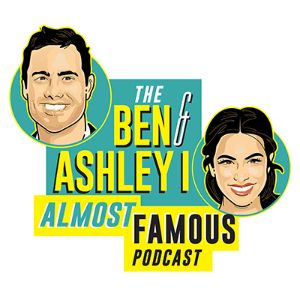 The Ben and Ashley I Almost Famous Podcast

The Ben and Ashley I Almost Famous Podcast

In The Ben and Ashley I Almost Famous Podcast, Bachelor fan favourites Ben Higgins and Ashley Iaconetti Haibon host a weekly podcast about The Bachelor, The Bachelorette and Bachelor in Paradise. They interview other Bachelor franchise alums and celebrity fans, and recap recent episodes.

The Ben and Ashley I Almost Famous Podcast: Podcast Review

I am a loyal member of Bachelor Nation, and have watched every episode since the first one aired in 2002. As of this writing, we are up to 23 seasons of The Bachelor, 15 of The Bachelorette and six of Bachelor in Paradise. So, it’s only appropriate that I listen to three Bachelor podcasts regularly, one being this podcast hosted by Ben and Ashley. Does that make me a connoisseur? I think so.

Ben and Ashley are well-matched as hosts - Ben is an affable “boy next door” and Ashley is more opinionated and interesting, and has a masters in broadcasting and journalism. This isn’t hard-hitting stuff, but it is noticeable that Ashley does her research and preps her questions. The lead-up to her recent wedding to Jared Haibon, another Bachelor alum, got a bit tiresome, but I enjoyed hearing their love story play out. He rejected her (publicly on two separate Bachelor in Paradise seasons) and put her in the friend zone until he realized his feelings when she came home from Bachelor Winter Games with a boyfriend. It was straight out of a romantic comedy, and I was here for it.

This Bachelor podcast secures the most Bachelor guests and the odd celebrity fan (from straight male country singers to a Backstreet Boy). I just wish the hosts prodded the guests more and got them to spill the tea on the stuff we really want to know, like the undercover franchise jerks or who really didn’t go on the show “for the right reasons.” The hosts are too nice and prioritize their friendships with fellow Bachelor alum over offering warranted criticism or asking pointed questions of their guests. They are inexplicably BFFs with Dean and now Caelynn, the most unlikable Bachelor couple in recent memory. Dean lives in a van and can’t commit, and Caelynn lied her way into his backseat.

Final verdict: the best Bachelor guests but not enough tea spillage. And too many “fit tea” ads.