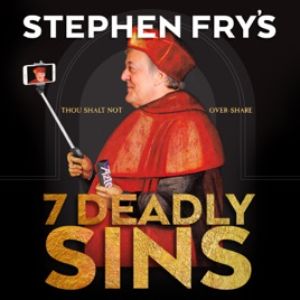 Stephen Fry dives into each of the traditional 7 Deadly Sins of the Western Christian tradition, reflecting on his own life and the state of society today along the way.

Full Disclosure: Stephen Fry has got to be one of my favourite humans.  His restless intellect and prodigious talent as a scholar, speaker and writer has led him to pursue so many creative endeavours, including but certainly not limited to a comedy duo with House’s Hugh Laurie, appearances on Rowan Atkinson’s Blackadder television series, hosting the British equivalent of Jeopardy, writing well-received novels such as Making History, narrating the entire Harry Potter series as Audiobooks and putting on one-man shows about Greek mythology at theatre festivals such as Niagara On the Lake, Ontario’s Shaw Festival.  So when I learned he had thrown his hat into the podcasting space, of course I was going to give it a listen.

In truth, “Stephen Fry’s 7 Deadly Sins” is his second podcast.  His initial one was titled “Great Leap Years”, which dealt with sudden technological innovations and the underlying historical and social context in which they appeared- Gutenberg’s moveable-type press was the first episode, for example.  And, while interesting and very well researched, I feel he really hit his stride with the medium in this follow up series dedicated to analyzing the seven deadly sins.  If you need a quick refresher, they are Pride, Greed, Lust, Gluttony, Envy, Wrath and Sloth.  In each roughly 30 minute episode Fry examines the underlying premise of the kind of behaviour that defines each “sin”, not from a theological perspective but a universal one as applies to all people living in our 21st century world, religiously-minded or not.  Much ribald, funny, and frank discussion ensues that may inspire you to view your own life and behaviour through a different lens.

Word to the wise: although he is a distinguished scholar and author, Fry is certainly not beyond letting loose some pretty coarse language (in face, an exploration as to why certain anatomical terms and verbs are considered coarse is a pretty integral part of the “Lust” episode) so the 7 Deadly Sins podcast is not one to play on the car stereo driving the kids to work.