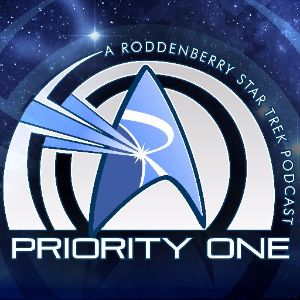 Priority One: A Roddenberry Star Trek Podcast, is a series about all things Star Trek from episode reviews to BTS news to gaming, rumours and more.

Star Trek is a franchise that has spanned generations. It shows hope for the future, diversity and tackles so many other human issues on so many different levels. To put it simply, who wouldn't want to explore space? It's something we can all relate to.

Priority One podcast dissects weekly Star Trek news (and yes there is weekly Star Trek news). When there's a current Star Trek series, they'll break down recent episodes and analyze the happenings, keeping in mind the deep and detailed Star Trek lore and importantly also, the vastly different demographics relating to it. They touch on Star Trek gaming and the many online games to do with the franchise. In fact, in this way they're very interactive with their fans. Listeners can actually log on and play Star Trek Online (a popular Star Trek MMO) with the podcast hosts.

The show is hosted by Elijah (he goes by one name like Cher), Cat (also a Cher wannabe) and Anthony Cox. All three of them are self-proclaimed "nerds". Something rightfully celebrated in communities like the Star Trek fandom. Cox is a self-proclaimed "professional internet nerd", Cat is an entertainment lawyer and "sci-fi nerd" and Elijah identifies as a "professional music theatre nerd". Hearing three people speak with no filters and no boundaries about something they're unabashedly passionate about is a breath of fresh air, and their passion is shared by most Star Trek fans so their deep dissection of minor subplots and excitement over minute rumours or advancements is all too well understood for the fandom.

Episodes vary in length--understandably, as with anything, some days are slower news days for Star Trek than others, but sitting anywhere from 45 minutes to an hour and a half it's a good amount of time for any superfan (and with Star Trek, admittedly, most fans are SUPERfans) to listen.

One thing that's very special about this podcast is how well they interact with their listeners. They often devote time to comments, questions and subjects asked for by fans and make a point to interact with them via gaming platforms. I can't think of much they could improve on so I'll leave it at that and say keep up the good work, live long and prosper.