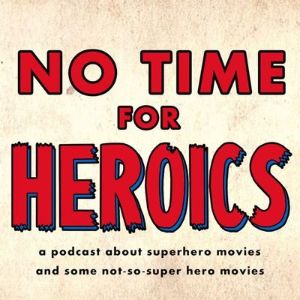 No Time for Heroics

No Time for Heroics

In No Time for Heroics, Andrew and Anthony (Later joined by Ainsley) and the occasional guest take deep dives into the popular culture of the past 20-30 years by means of reviewing movies featuring superheroes. Have you noticed there’s been a lot of them?

No Time for Heroics: Podcast Review

Coming at you straight outta St. John’s, Newfoundland, Andrew Hawthorn and Anthony Murphy started this podcast to do a thorough but at the same time lighthearted dive into the SuperHero Movies that have had an outsized, and ever increasing, impact on our culture since the late ‘70s.

The co-hosts are great communicators (both are journalists by trade), with Andrew typically playing the role of enthusiast while at-times acerbic Anthony takes mediocre entries down a few pegs.   From off-beat and semi-forgotten flicks like Sky High to beloved favourites like The Rocketeer to mega-super-duper-blockbusters like the unfortunately titled Marvels’ The Avengers They bring a great deal of research and awareness to their reviews, ultimately boiling it all down to whether each film was, indeed, an example of “super heroics”, whether it was a good adaptation of existing source material (where applicable) and, naturally, if it was indeed any good as a movie.

There are also a few one-off episodes featuring a review of classic superhero console games such as X-Men: Mutant Apocalypse and even rare comics such as Jack Kirby’s 2001: A Space Odyssey tie-in (a personal favourite).

The occasional guests, drawn from the hosts creative articulate circle of friends, always bring useful perspective and enthusiasm to their assigned flicks, and the quality of later episodes once professional academic Ainsley Hawthorn, Andrew’s spouse, joins the panel on a semi-permanent basis is truly exceptional.

The team only produced 101 hour-or-so long episodes at last check, but hope springs eternal they’ll get the band back together in this post-Avengers: Endgame world and crank out another season’s worth of content (if only because this reviewer is tired of holding his breath for that dang Logan review to come out…).