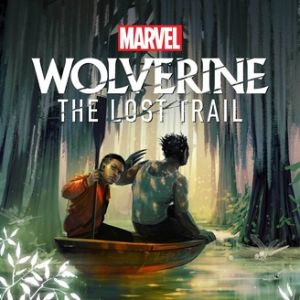 Presented like an old-timey radio drama, this story of the mysterious stranger known only as Logan moves from a creepy town in the interior of Alaska to the forbidding depths of Louisiana’s bayou as our protagonist struggles to discover the truth of his past and the evil forces pursuing him.

The production team at Stitcher pulled out all the stops to bring us this long-form audio drama surrounding a difficult time in the life of Marvel comics crankiest Canadian mutant, Wolverine (you are likely familiar with him as portrayed by Aussie actor Hugh Jackman over the course of 2 decades and 9 films).

Written by talented comics scribe Benjamin Percy some noteworthy voice talent including Richard Armitage (The Hobbit films) as the title character, Bob Balaban (The Life Aquatic, Best in Show) in season 1 and Blair Brown (Orange is the New Black) help bring the story to life as Logan proves that, even when you can only hear what he’s doing, he’s still the very best there is at it.  Especially when it’s not very nice.

Interestingly, the first season in particular in structured more like a Whodunit police procedural as a couple of FBI agents arrive in a remote Alaskan town where there has been a mysterious series of attacks by some kind of clawed…animal?  The show takes it’s time letting you get to know the various inhabitants of the town of Burns and, inevitably, discover that not all is as it may first appear.

The second season picks up some time after the first ends and follows Logan on the trail of his missing former lover Maureen in New Orleans, but it’s not long before the larger struggles of mutants and humans once again waylay him from him mission.