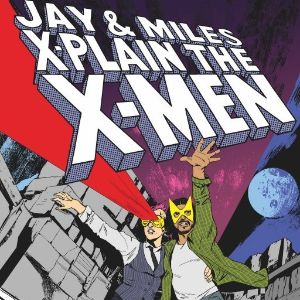 Jay and Miles X-plain the X-Men

Jay and Miles X-plain the X-Men

In Jay and Miles X-plain the X-Men, co-hosts Jay and Miles undertake to do the unthinkable and untangle the time, space, and sanity-bending comic book saga that is Marvel’s X-Men comics line and its many offshoots in a mostly-linear, always entertaining fashion.

This long-running series has been a consistent comfort and delight as it slowly but surely unpacks and documents the uncanny adventures of the X-Men, the enduringly popular and frequently controversial comics that trace their lineage all the way back to the zany boarding school antics written by Stan Lee and evolve through the soap operatics of Chris Claremont through to the daring reinventions of Grant Morrison, Joss Whedon and Jonathan Hickman,all telling the tale of a band of misfit “heroes” who protect a world that hates and fears them.

If none of the above names are familiar to you, worry not! Jay (previously Rachel) Edidin and Miles Stokes are here to start from the very beginning and fill you in on the storylines, characters, tropes and cardinal sins of the saga.

The hosts have tremendous chemistry and repartee- it’s easy to believe they were once married and have now been able to amicably keep the show going following their divorce.  They complement this energy with an encyclopaedic knowledge of pop culture in general and comics in particular as well as exhaustive research to craft perhaps the definitive meta-narrative of the X-Men narrative.

The episodes are also accompanied by blog posts showcasing the artists and specific panels they reference from the source material, which is a delightful rabbit hole to go down once you’ve listened.  There are also episodes dedicated to topical deep dives, creator interviews, comic conventions panels, and more!  But be warned, with nearly 300 recorded episodes at the time of writing if you decide to binge I hope you survive the experience!

Episode 1: The Strangest Podcast of Them All: Introduces the podcast and delves into the origins of the X-Men

Episode 5: The Retcon That Walks Like a Man: Introducing a new era of X-Men with the introduction of the “International Team” featuring fan favourites like Wolverine, Storm and Colossus.