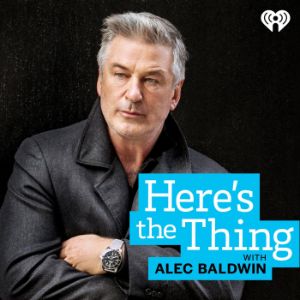 Here’s the Thing with Alec Baldwin

Here’s the Thing with Alec Baldwin

In Here’s the Thing with Alec Baldwin, actor and legendary raconteur Alec Baldwin interviews a fascinating mix of politicians, scientists, journalists and entertainers.

If you know of Alec Baldwin chances are you already know he has led a successful and varied life as an entertainer between film roles (Beetlejuice, Glengarry Glen Ross), TV roles (30 Rock), Saturday Night Live appearances (as both host and a recurring cast member impersonating Donald Trump).  I am convinced, however, that his greatest talents lie as a storyteller and in leading engaging chats with intriguing personalities across a variety of fields.

Although the titles for interviews with celebrity legends like singer Barry Gibb of the Bee Gees, film director Spike Lee or actress Kristen Bell (The Good Place, Frozen) might catch your eye first I have always found that Baldwin excels even more when pushed outside his showbiz comfort zone to talk to policy makers or scientists such as U.S. Congresswoman Katie Porter or psychiatrist Dr. Julie Holland.  He exhibits and everyman sense of curiosity as to how the world, and particularly the U.S. and New York City, actually work and does well to elicit clear answers from his distinguished guests.

Produced for years by WNYC public radio in New York, the show recently transitioned to iHeartRadio and shows every sign of being a going concern for many years, and important conversations, to come.

Katie Porter Enjoys Being a Fish Out of Water (43 mins) In 2018, U.S. Representative Katie Porter (CA-45) was the first Democrat ever to be elected in her traditionally conservative Orange County district. Prompted to run by Trump’s 2016 win, Porter quickly made a name for herself with her tough questioning of CEOs and administration officials, often using a whiteboard to lay out the facts. (…) A single mom to three school-age children, Katie Porter tells Alec people often have often underestimated her - at their own peril.

Everybody Loves Stanley Tucci (40 mins) Alec and Stanley Tucci have only been on set together a couple of times, but they established a rapport deep enough to carry over into a Zoom interview more than a decade later. The two share stories from their families, discuss what they love about working with certain fellow actors, and the difference between working in Hollywood and the UK.

Wynton Marsalis, Keeper of the Jazz Flame (41 mins) Wynton Marsalis was on the cover of Time as the avatar of the "New Jazz Age." His central role in reviving the genre is thanks partly to his gorgeous, virtuosic trumpet-playing, and partly to his founding of Jazz at Lincoln Center. (…) In front of a live audience at JALC's Rose Hall, Marsalis … goes deep with Alec about his father's influence -- and his racially fraught interactions with professors and conductors at Juilliard when he showed up from Louisiana in 1979.