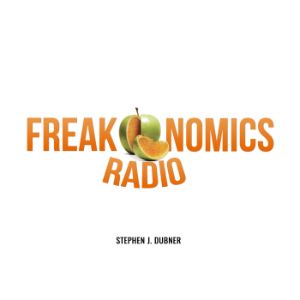 Building from out of the tremendous success of their initial collaboration on the book “Freakonomics” in 2009 economist Steven D. Levitt and journalist Stephen J. Dubner now have a tremendously popular podcast spinoff (mostly hosted by Dubner and others) that delves into the unusual, unexpected and at times unthinkable insights economists have on our politics, society and culture.

If you enjoy taking a fresh, data-driven look at what is happening in the world today Freakonomics may be the podcast for you.

Over the course of 400+ episodes of varying topics and formats journalist Stephen J. Dubner, economist Steven Levitt and their collaborators have conducted fascinating interviews with economists, social scientists, policy leaders and other experts at the forefront of their fields to try and understand the underlying socio-economic forces that shape our world and society.  The emphasis is generally on the United States but concepts and examples from around the world and history are incorporated to help the listener grapple with those trickiest of questions, the ones that begin with: Why?

Whether it is unpacking loaded terms like Socialism, or putting the quest for economic growth as a goal to the test, or even engaging in long-form interviews with noteworthy public figures (such as actress and neuroscientist Mayim Bialik, whom you may know best as Sheldon’s long-suffering partner Amy from The Big Bang Theory, or the visionary founder of ubiquitous streaming service Netfix, Reed Hastings) the topics are presented for the benefit of a general audience and without taboos or sacred cows.  Dubner and Levitt were the ones who argued that the drop in violent crime rates throughout the late 1990s correlated to access to safe and legal abortions in the U.S. a generation previously in their initial collaboration, after all!

The episodes are organized by topic and there is no particular theme or arc to a particular “season” which means that, while the back catalog is full of interesting content, there is nothing to prevent a new listener from simply jumping on now.  In truth your reviewer has only listened to a half dozen or so of the more recent of the hundred of episodes but, even hedging for a small sample size, I can safely predict that Freakonomics will pod on and continue to grow its listenership well into the future.  See?  They already have me talking the talk.