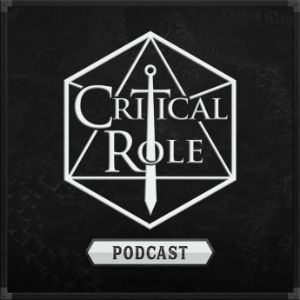 Self-described as a bunch of nerdy-ass voice actors getting together to play Dungeons and Dragons, Critical Role mixes a lot of good humour and fun with some genuinely strong acting and storytelling. If you enjoy D&D, you will likely enjoy fun game play, but prior knowledge of D&D isn’t necessary as the storytelling, great voices, and strong acting really make it a compelling show – you can definitely see that these people are professional voice actors.

I can’t even recall how I stumbled on Critical Role, but it is one of a small list of podcasts from which I eagerly await each new episode. I literally have a reminder on my phone when they are available. While the multi-hour role-playing sessions are first available on Twitch, they are put up as podcasts a week later.

Helmed by Matthew Mercer as a Dungeon Master (DM) the cast of the show are all experienced voice actors. They bring their variety of voices and strength of character acting to playing a compelling group of characters to life each week – I genuinely love Laura Bailey as Jester, and Matt Mercer when he does characters such as Pumat Soul (trust me, it’s worth a listen for that alone). The party plays a slightly home-brewed version of 5th edition Dungeon and Dragons, they mix a lot of humour, swearing, pop culture references, and bad puns together with some strong acting and amazing voices to weave a story that is surprisingly emotionally engaging at points and undeniably entertaining at others.

If you’re an avid D&D player, or simply someone who got a bit curious after watching Stranger Things, this show (and the community that surrounds it) is a friendly way to scratch that role-playing itch and learn more about the game. If you’re into marathoning shows (Netflix, podcast, or otherwise) the good news is that this show has been around for a number of years – they have finished one campaign, are well into a second one, and have a host of “one-shot” adventures with guests. Basically, if you find you like Critical Role, you won’t run out of listening material any time soon.

Alex Conde works in content marketing and has a deep love for good stories and good food. He also believes that every dog deserves a home – check out Redemption Paws