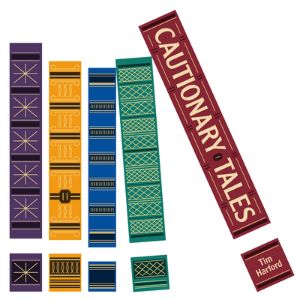 From the same production company that brings you Malcolm Gladwell’s “Revisionist History” comes Cautionary Tales, presented by author, economist and columnist Tim Harford on the all-too-true stories of the colossal blunders in various human endeavours to glean what we can learn from them, and what may have overlooked the first time ‘round.

In Cautionary Tales, noted writer and columnist Tim Harford takes to the Podcast-waves to in collaboration with Pushkin industries in order to shine alight on some well and less-well-known incidents where mistakes were most definitely made. Sometimes it is with immediately disastrous results like the grounding of the oil tanker Torrey Canyon.  Other episodes that shed light on calamities literally decades in the making (such as the British Army’s seemingly baffling decision to cease investing in research, planning and development into tank warfare following the First World War) but all are worth knowing more about.

As with Revisionist History the series has its highs and lows, but the storyteller style and the effort put into breathing life into the lived experiences of real persons in times past makes it a worthwhile listen,with many lessons that can be applied to our business and personal lives in 2020 and beyond.

DANGER: Rocks Ahead! about the now less-remembered (at least outside the UK) incident involving the crash of the supertanker Torrey Canyon into well charted islands off the British coast and how such an obvious error became slowly and slowly more inevitable over the vessel’s fateful final hours.