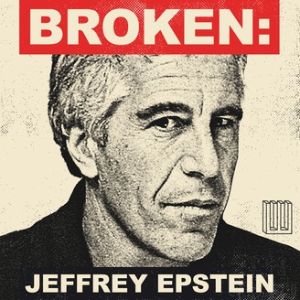 In Broken: Jeffrey Epstein, Ariel Levy (The New Yorker) and Julie K Brown (The Miami Herald) dig deep into the pedophile monster Jeffrey Epstein, his accomplices and the broken judicial system that enabled his crimes and failed his victims. Brown executive produces as the journalist who first broke the story on Epstein and on one of the biggest and most far-reaching scams in modern history.

I should preface my review for Broken: Jeffrey Epstein by letting you know that I am straight up obsessed with the Epstein story and follow it closer than most. I was already familiar with all the facts in the introductory Broken episode, but it is a good primer for those who need a summary before jumping in deeper to specific aspects of the ongoing Epstein investigation.

In subsequent bi-weekly episodes (two as of this writing) I am learning new facts and perspectives. Episode two digs into his twisted relationship with his “number two” Ghislaine Maxwell, a socialite with severe daddy issues. Maxwell recruited underage women to their sex ring and will likely be the focus of future criminal and civil charges now that Epstein is dead from apparent suicide. I found episode three to be the most interesting of those published so far. It investigates the source of Epstein’s immense wealth and lays out evidence of it being accumulated illegally. If proven, his wealth - currently tied up in trusts in the Virgin Islands - could be turned over to US regulators and distributed to his victims. It’s true what they say, follow the money!

There’s a lot to cover in future episodes, from his political connections to the likes of Bill Clinton and Donald Trump to his academic donations to Harvard and MIT to the broken judicial system that enabled his crimes and failed his victims. One of the biggest question marks is his connection to billionaire Les Wexner, Founder of Victoria’s Secret and L Brands. Epstein “managed” Wexner’s wealth and Wexner was his only public client. Wexner transferred the deed of his Manhattan mansion to Epstein under unknown financial arrangements. That relationship runs deep and suspicious.

This is a story of greed, corruption and monstrous crimes at the expense of desperate young women, and I hope this podcast and the incredible journalism led by Brown lead to the uncovering of new facts and justice being served.