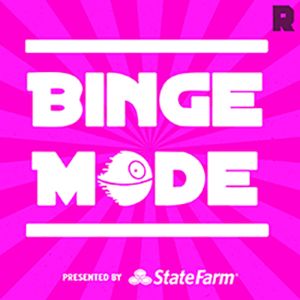 Binge Mode by the Ringer

Binge Mode by the Ringer

Binge Mode by the Ringer is an in-depth look into the most popular TV show & book series of all time, Game of Thrones, as well as other epic fantasies, like Harry Potter.

Imagine two people obsessed with Game of Thrones. Now imagine them talk indepth about central plot themes, hardcore character analysis and debating canon. If this sounds like your jam, Bingemode by The Ringer is made for you. This show is a must-listen for ALL GOT addicts. If you haven’t heard it yet, are you even a fan?

The hosts- Emmy award winner Jason Concepcion, and Mallory Rubin are GOT experts who spew out facts & history without being boring. The duo know everything there is to know about the show and the books and spend at least an hour, dissecting each episode. Somehow, they make the hour go by faster than Bran falling out a window – mostly because they’re hilariously funny, shockingly witty and have clearly bonded over their mutual enthusiasm for the show. What’s also really cool about Jason & Mallory is that they’re true fantasy nerds, through & through. They’re able to draw parallels & comparisons to other epic fantasies, which makes the nerd in me, super happy. I love nothing better than people mixing references to LOTR & Harry Potter.

The hosts passion (bordering on obsession at times) comes through in every single episode. Mallory's tears whenever there's a mention of Ghost or Jason's impeccable impressions of the characters only adds to the entertainment value of the show. Their detailed knowledge of the back stories, combined with their hilarious commentary, makes for highly listenable content.

Rated as one of the best podcasts of 2018 by Times Magazine, the Binge Mode podcast is truly worth a listen Plus, if you’re a Harry Potter or Star Wars fan, they cover that in detail too! 5/5 any day of the week.